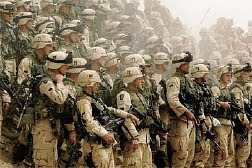 "We Can’t Afford War"
By Amy Goodman
“General Petraeus is a military man constantly at war with the facts,” began the MoveOn.org attack ad against Gen. David Petraeus back in 2007, after he had delivered a report to Congress on the status of the war in Iraq. George W. Bush was president, and MoveOn was accusing Petraeus of “cooking the books for the White House.” The campaign asked “General Petraeus or General Betray Us?” on a full-page ad in The Washington Post. MoveOn took tremendous heat for the campaign, but stood its ground.

Three years later, Barack Obama is president, Petraeus has become his man in Afghanistan, and MoveOn pulls the critical Web content. Why? Because Bush’s first war, Afghanistan, has become Obama’s war, a quagmire. The U.S. will eventually negotiate its withdrawal from Afghanistan. The only difference between now and then will be the number of dead, on all sides, and the amount of (borrowed) money that will be spent. Petraeus’ confirmation to become the military commander in Afghanistan was never in question. He replaces Gen. Stanley McChrystal, who resigned shortly after his macho criticisms of his civilian leadership became public in a recent Rolling Stone magazine article.

The statistics for Afghanistan, Obama’s Vietnam, are surging. June, with at least 100 U.S. deaths, is the highest number reported since the invasion in 2001. 2010 is on pace to be the year with the highest U.S. fatalities. Similar fates have befallen soldiers from the other, so-called coalition countries. Petraeus is becoming commander not only of the U.S. military in Afghanistan, but of all forces, as the invasion and occupation of Afghanistan is run by NATO. U.S. troops, expected to rise to 98,000 this year, far outnumber those from other nations. Public and political support in many of those countries is waning.

Journalist Michael Hastings, who wrote the Rolling Stone piece, was in Paris with McChrystal to profile him. What didn’t get as much attention was Hastings’ description of why McChrystal was there: “He’s in France to sell his new war strategy to our NATO allies—to keep up the fiction, in essence, that we actually have allies. Since McChrystal took over a year ago, the Afghan war has become the exclusive property of the United States. Opposition to the war has already toppled the Dutch government, forced the resignation of Germany’s president and sparked both Canada and the Netherlands to announce the withdrawal of their 4,500 troops. McChrystal is in Paris to keep the French, who have lost more than 40 soldiers in Afghanistan, from going all wobbly on him.”

The whistle-blower website WikiLeaks.org, which received international attention after releasing leaked video from a U.S. attack helicopter showing the indiscriminate slaughter of civilians and a Reuters cameraman and his driver in Baghdad, has just posted a confidential CIA memo detailing possible public relations strategies to counter waning public support for the Afghan War. The agency memo reads: “If domestic politics forces the Dutch to depart, politicians elsewhere might cite a precedent for ‘listening to the voters.’ French and German leaders have over the past two years taken steps to preempt an upsurge of opposition but their vulnerability may be higher now.”

I just returned from Toronto, covering the G-20 summit and the protests. The gathered leaders pledged, among other things, to reduce government deficits by 50 percent by 2013. In the U.S., that means cutting $800 billion, or about 20 percent of the budget. Two Nobel Prize-winning economists have weighed in with grave predictions. Joseph Stiglitz said, “There are many cases where these kinds of austerity measures have led to ... recessions into depressions.” And Paul Krugman wrote: “Who will pay the price for this triumph of orthodoxy? The answer is, tens of millions of unemployed workers, many of whom will go jobless for years, and some of whom will never work again.”

In order to make the cuts promised, Obama would have to raise taxes and cut social programs such as Social Security and Medicare. Or he could cut the war budget. I say “war budget” because it is not to be confused with a defense budget. Cities and states across the country are facing devastating budget crises. Pensions are being wiped out. Foreclosures are continuing at record levels. A true defense budget would shore up our schools, our roads, our towns, our social safety net. The U.S. House of Representatives is under pressure to pass a $33 billion Afghan War supplemental this week. We can’t afford war."
- http://www.truthdig.com/report/item/we_cant_afford_war_20100629/?ln
Amy Goodman is the host of “Democracy Now!,” a daily international TV/radio news hour airing on more than 800 stations in North America. She is the author of “Breaking the Sound Barrier,” recently released in paperback and now a New York Times best-seller.
•••
A lot of innocent people can't afford war, either...
Posted by CoyotePrime at 9:22 PM

Amy has never been on board with war. She doesn't understand the big picture it seems.

My prediction for Afghanistan from the McChrystal Ball:
1. The Taliban will do little more than make casual attacks on the US,UK military. This will be described by the US and UK press as "ferocious attacks by large numbers of militants"
2. In fact, the Taliban will largely sit on the sidelines and wait for the US and UK forces to leave.
3. The Taliban will then move into all provinces of Afghanistan in large numbers, causing the local Police and Army to run away.
4. Local Afghans will welcome the Taliban with open arms.
5. US and UK Governments will blame weak and ineffective Afghan government for all the problems.
6. All Politicians on every side of Nato will congratulate one another on a job well done.

Tony-youve been around the block now haven't you.

RZ-these are powerful videos by this man. If only they would make that difference.

Interesting fact about james Blunt is that he's a former Infantry Lt. when he was in the British Army. He knows whereof he speaks...

Iraq, and Afghanistan will eventually be semi-Islamic Republics. Our soldiers are dying for the inevitable.

'Tony-youve been around the block now haven't you.'
Maybe so, OF but I'm right.

Tony: On this side of the pond when some one says
" you've been around the block a few times." pertaining to your comment. It is meant as a compliment.

Thank you for that RZ!

OF: Tony lives in Scotland. He has visited our colonies before. But I am sure he is not as familiar with some of our cliches, just as we are not familiar with their cliches.

He has two excellent blogs. 'Wolves in the city' and 'Afghanistan War' both links are on my blog roll. I am sure you will enjoy both of them.

Yes Tony that was actually an comment of agreement.

Thanks for clarifying that, guys. In the UK it means you're over the hill, which I'm not(yet).
best
T

LOL. That is what I figured.