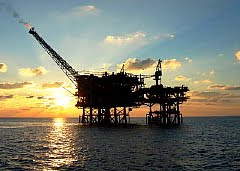 "BP Discussing a Backup Strategy to Contain Oil"
By Henry Fountain
"Since shortly after oil began spewing into the Gulf of Mexico two months ago, relief wells have been discussed as the ultimate solution, their success in permanently plugging the runaway well deemed a foregone conclusion. But BP and government officials are now talking about a long-term containment plan to pump the oil to an existing platform should the relief well effort fail. While such a failure is considered highly unlikely, the contingency plan is the latest sign that with this most vexing of engineering challenges — snuffing a gusher 5,000 feet down in the gulf — nothing is a sure thing.

Kent Wells, a BP senior vice president in charge of subsea containment and capping efforts, said Monday that the first relief well was “progressing very well” and on target to intercept the runaway well more than three miles below the surface of the gulf. “It’s not a matter so much of if, as when,” Mr. Wells said of the effort, which will involve pumping heavy mud and cement through the relief well into the damaged well to plug the damaged well permanently. “But we always said we wanted to have backups for backups,” he added about the contingency plan, which was first revealed by Adm. Thad W. Allen of the Coast Guard, the national incident commander for the spill.

Experts said it was conceivable that the “kill” procedure would not be effective, particularly if only a single relief well was used and the bottom of the well bore was damaged in the initial blowout. Pumping large quantities of erosive mud into the well could even end up damaging the well further, hindering later efforts to seal it. “I won’t say there haven’t been relief wells that haven’t worked,” said a technician involved in the effort. There are questions about the damaged well’s condition, particularly near the point where the interception would take place, and whether it could affect the kill procedure. “No human being alive can know the answers,” said the technician, who spoke on condition of anonymity because he was not authorized to comment on the work.

The backup plan would involve continuing to collect the oil through several systems at the wellhead and pumping it through a subsea pipeline to an existing production platform at least several miles away. Mr. Wells said several platforms had been identified as possibilities, although no decisions had been made.

BP is currently drilling two relief wells from rigs that are each about a half-mile from the site of the blown-out well. The first well is about a thousand feet vertically from the interception point and more than 17,000 feet below sea level. The second well, which was started about two weeks later than the first, is not as far along, and Mr. Wells said Monday that if the first well succeeded in plugging the gusher, drilling of the second would be halted. “We feel very good about the progress we’ve made,” he said.

The company was still holding to a timetable of early August for completion of the first relief well, Mr. Wells added, barring delays due to bad weather. Tropical Storm Alex, which is expected to become a hurricane and is on track to hit Texas, is not expected to delay the drilling effort. Mr. Wells said that the first well had closed within about 20 feet horizontally of the damaged well, and that crews would be conducting 8 to 12 more magnetic ranging tests — each of which takes about half a day — to determine the precise location of the metal casing pipe in the damaged well bore. The goal is to continue to drill the relief well in parallel with the damaged well to within about 200 feet vertically of the interception point, and within five feet horizontally. Then the remaining 200 feet will be drilled, and a milling device will be used to cut into the casing pipe of the runaway well.

Once the two wells are connected, heavy drilling mud will be pumped down the relief well and into the damaged well’s bore, building up a column of mud that would eventually exert enough downward force to overcome the pressure of the rising oil. Mr. Wells said there were roughly 44,000 barrels of mud available at the site. The advantage of such a “bottom kill” is that it immediately starts to reduce pressure in the damaged well bore as the column of mud builds up, Mr. Wells said. This is in contrast to the “top kill” procedure, which was tried unsuccessfully last month, in which pressure builds as mud is pumped into the top of the well. BP officials said one reason the top-kill effort was abandoned was out of concern that a pressure buildup might damage the well.

The technician, who has knowledge of the effort, said he was optimistic that the relief-well procedure would succeed, in part because the frictional pressure of the mud in the well bore would contribute to its ability to overcome the pressure of the oil. But he said BP would improve its chances for success if it waited for the second relief well to be completed, so that it could pump twice as much mud into “a well that’s this powerful, this productive and this problematic.” He said that too little was known about the condition of the well bore near the bottom — whether, for instance, it had been enlarged by the high-pressure flow of oil over the past two months. “The engineering suggests that one relief well is enough,” he said. “But there are just all these unknowns.”
- http://www.nytimes.com/2010/06/29/us/29wells.html
•
"Just in case this doesn't work..." So all they have to do is work with this:

"The deposit is said to be either the largest or the second largest oil deposit ever found, capable of producing 500,000 b/d for 10 or 15 years. It is massive, covering an offshore area of something like 25,000 square miles (64,750 sq.km). One blogger said Natural Gas and Oil is already tapping into the deposit from as far inland as Central Alabama and way over into Florida and even over to Louisiana as almost as far as Texas. The deposit’s natural gas component is reportedly estimated at 10,000 times its oil content. Its central pressure is said to be 165,000-170,000 PSI. In short, it’s a huge bomb in the nucleus of the earth. That’s why BP can’t blow up the leak-site with torpedoes or nuclear weapons as some people have suggested in the hope of sealing up the hole."
- http://www.saudigazette.com.sa/

So IF the borepipe they're drilling to hasn't already been completely eroded away and destroyed by the escaping crud from the reservoir, powered by 165,000 PSI, all they have to do is cut the pipe and pump the cement into it. Of course they have hydraulic machinery/pumps that can do that, right? Right? Uh oh... - CP
Posted by CoyotePrime at 11:38 AM

Has any one seen any more chatter about putting nuke into it?