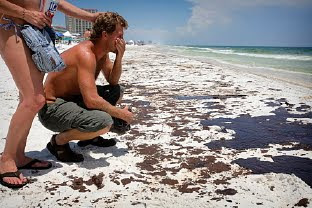 "BP’s Fake Cleanup Just A PR Stunt"
by CBS5
"A former BP Gulf Oil Spill cleanup worker has came forward to break the BP media blackout and has revealed to a local Pensacola CBS news station, WKRG Channel 5, that the BP cleanup operations are nothing more than a fake PR stunt meant to keep the sight of oil out of the eyes of the public. The whistle blower revealed that each tide cycle leaves a layer of oil on the beach and when the next tide cycle comes in the oil on the beach is covered by a few inches of sand brought in by the new tide. As the tide goes back out, that’s when BP workers hit the beach and cleanup up only the tarballs and oil that remain on the surface to give the beach the appearance of being oil free. As the cycle of tides continue the once clean pristine white beaches of sand along the Gulf Coast become layers of sand and oil that is not being cleaned up by BP.

The whistle blower tells CBS news that a real cleanup needs to happen now while BP is here before the money disappears and the beaches are destroyed forever. "Former Oil Worker Says Cleanup Just For Show," WKRG Channel 5 CBS Pensacola, June 24, 2010: "Former oil clean-up worker Candi Warren says she signed up to make a difference, but soon found out the work of cleaning the beaches was all cosmetic. That’s what she was told, she says.

Warren says she knew that when crews worked during the day, the tide and surf buried oil overnight. But they were forbidden to dig it up. She quit in disgust three weeks ago despite the $18 per hour pay. She said she was told to only clean the surface of the sand, that this is all cosmetic. She was on a crew at Gulf State Park where tourists go. She says it has priority so as to make it look like the beaches are clean. Warren says she believes money is being wasted on the crews and says “At some point the real clean-up will have to begin, but I’m afraid the money will be gone.” She used a shovel and dug down six, eight, maybe twelve inches into the sand to show us the layers of oil close to the shoreline.

Transcript excerpts:
Candi Warren, former BP clean-up worker: This is for show… to make the condo owners — the property owners — think that the beachers are being cleaned up.
WKRG Reporter: She became concerned when she was instructed to remove oil from only the very surface of the sand though overnight, oil had become buried underneath sand — and is still there.
Warren: Cosmetic only, this is cosmetic. They told us not to dig.
Warren: We weren't allowed to talk to the media.
Warren: The money’s being used — its being abused… One day the cleanup is really going to have to happen, and the money’s gonna be gone."
- http://blog.alexanderhiggins.com/

What do they know? Again, the questions:

• Why isn't the military taking charge, and bringing in their ships, equipment and personnel? Why are they not at least in charge of organizing and supervising the cleanup effort?
• Why is the "cleanup" now revealed to be nothing more than a show? Why isn't BP making, or being forced to make, a real all-out effort to clean up this mess?
• What is the true condition of the "down hole" bore pipe? Has it in fact been completely destroyed?
• Why has BP been allowed to continue to refuse access to independent scientists attempting to determine the true flow rate of the escaping crude oil and methane?
• Why would BP so easily, and publicly, agree to a $20 billion dollar claims settlement fund, when oil companies are rightfully notorious for litigating in every legal venue?
• Where is FEMA? What are they doing?
• Why aren't other oil companies bringing in resources to help?
• Why have offers of help from foreign countries been refused?
They're all acting as if none of this really matters anyway, no matter what they do. What do they know that they're not telling us? Is it possible they believe, or know as a fact, that the methane bubble in the reservoir is going to explode, and there's nothing they can do about it? If so, why aren't the people being warned of the true situation, and being evacuated as a precaution? Would the government and BP really withhold that kind of information? What is really going on here? We have a right to answers to these questions. - CP
Posted by CoyotePrime at 10:33 PM

There is still oil just below the surface in Prince William Sound twenty plus years later after the Exxon Valdez spill. Oil in the sand on Florida beaches will be there long after BP is gone.

Better get use to it. This is what you get when republicans are in charge.

Before anyone yells at me, I should have probably said,

This is what you get when corporations are in charge -- not that there is much of a difference.

No there isn't Jerry.

Saw a header this morning that BP is collecting some 600,000 gallons a day or some damn thing like that.

I don't believe it for a second.

JC: I do not think any one here would yell at you my friend. LOL
Deregulate, deregulate, everything. This is all we have been hearing. Now we know how well that went. The Corporatistas should be null and void.

ONE: No we can not believe one single word coming out of these criminals. If their lips are moving they are lying. Something is going on down there. Obama's speech was very strange. It was as if he was holding something back. He did not seem very sure of himself. No one can tell me that this is an all out effort to deal with this night mare. It is as if they are waiting for something to happen.