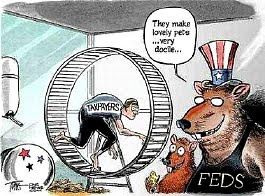 "They Keep Stealing- Why Keep Paying?"
by Dylan Ratigan
"The dire straits of the middle class of America has made it near impossible for our politicians to keep up the pretense that our current government truly works for the "people." Between the multiple overt and secretive bailouts, the massive bonuses and the circular use of our tax money to lobby for these continued handouts, you can no longer hide from the evidence. When Senator Durbin said "The banks... frankly own this place," you realize it was not in jest.

Couple this with recent protections handed by the Supreme Court to corporations to directly influence elections and it can make things seem hopeless for those not on Wall Street or their chosen politicians. Favored CEOs and now even foreign countries get all the printed money they need, leaving us paying both our bills and theirs. And now nearly a quarter of all Americans are currently underwater in their mortgage because of that steadfast honor.

If you are one of them, chances are you didn't do anything wrong. Almost all of you were not subprime borrowers or speculators, but merely people buying a house that they thought they could afford at the time. You were just unlucky in that you bought a house during a time when an outdated Wall Street and their complicit politicians decided to use housing to regain the income they lost due to the Schwabs and Etrades of the internet age. You didn't cause this mess. They did. Now you are struggling to make the same payments on this mortgage on your now overpriced home even in light of a crashing economy and massive deflation, all while the government does everything in its power to help Wall St. keep the bonuses coming.

Well, it is becoming time to take matters into your own hands... I suggest that you call your lender and tell them if they don't lower you mortgage by at least 20%, you are walking away. And if they don't agree, you need to consider walking away. It probably doesn't feel right to you. That is because you probably are a good person. But your mortgage is a business deal, and it is not immoral to walk away from a business deal unless you went in to the deal with the intention of defaulting. But somehow, even though the corporations are pumped to exercise their new rights, former bankers like Henry Paulson, current ones like Jamie Dimon and - get this - now even Fannie Mae execs want to keep you from exercising your rights.

But before you let them (or anyone commenting below) force you into paying that $500k mortgage on a $300k house, ask them if they'll push Jerry Speyer into "honoring his obligation" by breaking into his $2 billion personal piggy-bank to keep paying for Stuyvesant Town? Or how about asking Hank and Jamie to lecture fellow bailed-out CEO John Mack about how "you're supposed to meet your obligations, not run from them"? Maybe make him use some of his $50+ million for those buildings he bought in San Francisco? And before shaming and punishing American homeowners, did they nag Steve Feinberg about helping "teach the American people...not to run away" by writing a check out of his billion-dollar pocket to cover all the stiffed landlords and vendors at Mervyn's? After all, at least you aren't single-handedly putting 1,100 employees out of work when you walk on your mortgage.

As part of the deal for your house, your mortgage holder gets interest payments from you and they also use the note to your house for their capital reserves. In return, they take the risk of a foreclosure. In many states, you paid extra to have a non-recourse loan where the lender just gets the house back if you stop paying - your interest rate would've been much lower if you were held personally liable like a student loan. But if you still feel bad, then donate the money saved to charity instead of to their bonuses. And when someone tries telling you why it is so wrong, here are some answers:

- Yes, it might seem selfish, but you are actually going to help fix our country the right way, through the use of pure capitalism. There are 3 parties involved in your mortgage - the mortgage holders, the servicing bank and you. You probably want to stay in your house. Most of the people who actually own your mortgage also want you to stay in your house, preferring a mortgage reduction that you keep paying instead of the total loss of a foreclosure. But the major banks (BofA, Wells Fargo, JP Morgan, Citi, etc.) that underwrite and service the loans don't care about either of you. They (with the aid of their government) just care about hiding their true financial condition for long as possible so they can continue to bonus themselves outrageously. The credible threat of you walking away from your mortgage en masse is the only market-based solution that will force these banks to work with the mortgage holders on your behalf.

- No, you will not "hurt" your neighbors - certainly not near the scale of the banksters. Chances are someone just as nice as you will move in and (unlike you) pay a fair, non-inflated price for the house. Encourage your neighbors to fight back against the banks and ask for their own mortgage reductions as well.

- Yes, it might make getting a loan harder for everyone. Considering the spate 0% down NINJA loans over the past decade, that probably isn't a bad thing.

- Yes, it might hurt your credit. But with time, people bounce back from having foreclosures on their record. Search online and then talk to a lawyer about the repercussions, which vary by state.

- No, the banks won't necessarily pass the losses on to customers. They already make a lot of money. If costs are passed on to every consumer without banks competing on price, that's a sign of illegal collusion or a monopoly. Let's fix that instead of just letting banks ruin our lives. They might, however, not all make $145 billion in bonuses next year doing something fundamentally so easy that it is an unpaid job in Monopoly.

Meanwhile, our captured government has made it clear that they want to further reward these banksters because there are clearly better ways to "save" the economy without rewarding those most responsible for the damage. Instead of claw backs for the past theft and strong financial reform for the future, they choose to cover-up the gross misuse of our tax money, making our country worse by helping the criminals on the backs of the most honest. But thankfully, in this country we still have the tools to fight back and regain our country. Our vote, our voice, our laws and what we choose to do with every penny we have that doesn't go to taxes are the benefits of our hard-fought freedom, and in this battle we must use them all to fight back. It's time for the citizens to once again own this place."
- http://www.huffingtonpost.com/dylan-ratigan/who-pays_b_624149.html
Posted by CoyotePrime at 10:51 AM