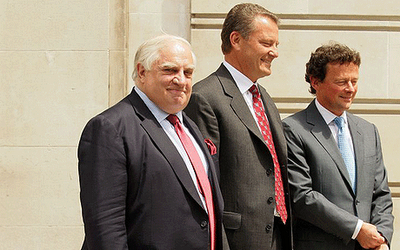 BP chairman Carl-Henric Svanberg (centre) with his predecessor Peter Sutherland (left) and BP chief executive Tony Hayward. On Wednesday, BP Chairman Carl-Henric Svanberg told reporters in Washington: "I hear comments sometimes that large oil companies are greedy companies or don't care, but that is not the case with BP. We care about the small people." Unfortunately for Mr. Svanberg, a copy of an internal BP company song has surfaced from a disgruntled former employee which apparently refutes that claim of compassion. BP has declined to comment on this report. Judge for yourself:
Free download: http://www.last.fm/music/dan+e.+bloom
•••
And another song from those ever so charming folks at BP:
BP "Small People" Song:
http://blogs.thewolfonline.com/mikeandamy/2010/06/18/bp-small-people-song/
Posted by CoyotePrime at 11:31 PM

Hee hee. These guys are as out of control as the gusher. Maybe people will finally start seeing them for who they are.

Hi, i wrote that song, well borrowed it from Randy Newman, just tweaked it. J Gale Kilgore does the vocals