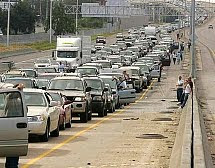 "Gulf Coast Evacuation Scenario Summer/Fall 2010"
by SCMLA
Editor’s note: There is no definitive evidence the government plans mass evacuation at this point. In fact, the government refuses to admit gases in the Gulf exist or pose a health issue. All of this may change as the problem worsens.

"SoCal Martial Law Alerts (SCMLA) has been in existence for a year and a half and this is our first MARTIAL LAW ALERT. We have withheld putting out information on the Gulf oil spill for a variety of reasons, but there is now enough evidence for us to put together a fairly clear picture of what really happened, what may result and to warn people who live in the area.

THE SITUATION: Due to toxic gases from the fractured oil well in the Gulf of Mexico, the possible off-gassing of the highly-toxic Corexit 9500 (the chemical dispersant used by BP in the oil spill clean-up), acid rain and various as-yet-unknown forms of environmental damage, we believe that the government will have no choice but to relocate millions of people away from the Gulf Coast. Those living in Florida are presently at the highest risk, but the danger also appears likely to spread to all Gulf Coast states east of Louisiana and possibly even to the entire Eastern half of the United States once hurricane season begins.

Greg Evensen, a retired Kansas Highway Patrolman, estimates that 30-40 million people would need to be evacuated away from the Gulf’s coastline (i.e. at least 200 miles inland). In order to accomplish this gargantuan feat, the federal government (through FEMA and other agencies) would most likely seek first to control and manage the transportation system and then operate relocation centers to manage evacuees. Toward this end, the Federal Aviation Administration (FAA) has already declared the airspace over the oil spill site to be a no-fly zone until further notice. Various sources have indicated that local police, highway patrol, National Guard, US military and foreign troops may be involved in an operation to evacuate the Gulf Coast. In fact, the Governor of Louisiana has already requested evacuation assistance (i.e. National Guard) for his state from the Department of Defense (DoD) and the Department of Homeland Security (DHS).

Those living inland may also be at risk, since the movement of vast numbers of evacuees would cause a significant strain on local resources. In other words, inlanders should not expect life to continue “as normal,” since, under a martial law scenario, the government would have the power and the motivation to seize everyday necessities, such as: food, water, fuel, housing, etc. Some have also suggested that if a hurricane were to occur over the oil spill area itself, lightning might possibly ignite volatile organic compounds, not to mention the acid rain clouds that could form and be carried inland (i.e. acid rain could pollute the water table, destroy crops, kill wildlife and pose significant health risks to humans in the southern and eastern states.)

Lastly, Lindsay Williams, a former Alaskan pipeline chaplain with high-level oil industry connections, has suggested that BP, in conjunction with the federal government, might try to cap the well by using a nuclear explosion – the environmental consequences of which are currently unknown.

OUR RECOMMENDATION: If you live, or if you know people who live on, or within 200 miles of the Gulf Coast area, we recommend that they immediately relocate to at least 200 miles inland (i.e. the farther away, the better). If people living within this 200-mile zone do not relocate voluntarily (i.e. on their own initiative), it appears likely that a forced evacuation through a martial-law scenario may occur within the coming weeks and (possibly) months.

Our country has been in a state of national emergency since September 11, 2001, which means that martial law (i.e. military rule) can be declared by the President at any time, for any reason – large, or small. If martial law is implemented, evacuees will lose their ability to determine when and where they will move and for how long, since the normal protections of the Constitution and the Bill of Rights will have been suspended. To put it bluntly, a scenario in which evacuees are forced to live in relocation centers for an unspecified length of time is not unlikely."
- http://www.infowars.com/gulf-coast-evacuation-scenario-summerfall-2010/
Posted by CoyotePrime at 12:50 PM

While I think some of these articles on the potential calamity connected to the oil spill border on melodrama and lunacy, I still think it's a good idea to catalog them. What may seem like lunacy today might well turn into tomorrow's reality -- of course, some of it won't.

As to the present article, I'm not very convinced because the two cited sources were a) a former Kansas Highway Patrolman and b) "a former Alaskan pipeline chaplain."

What in the hell is an Alaskan pipeline chaplain? Does he or she bless the pipes before they put them into service?

Taoist:
I do not know what a pipeline chaplain does. I guess it is sort of like the Sky Pilots [U.S Military Chaplains] when they blessed the soldiers before going on a bombing raid, or into battle in Nam.