"How the Ultimate BP Gulf Disaster Could Kill Millions" 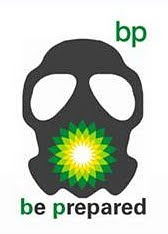 "How the Ultimate BP Gulf Disaster Could Kill Millions"
by Terrence Aym
"Disturbing evidence is mounting that something frightening is happening deep under the waters of the Gulf of Mexico—something far worse than the BP oil gusher. Warnings were raised as long as a year before the Deepwater Horizon disaster that the area of seabed chosen by the BP geologists might be unstable, or worse, inherently dangerous.

What makes the location that Transocean chose potentially far riskier than other potential oil deposits located at other regions of the Gulf? It can be summed up with two words: methane gas. The same methane that makes coal mining operations hazardous and leads to horrendous mining accidents deep under the earth also can present a high level of danger to certain oil exploration ventures.

Location of Deepwater Horizon oil rig was criticized: More than 12 months ago some geologists rang the warning bell that the Deepwater Horizon exploratory rig might have been erected directly over a huge underground reservoir of methane. Documents from several years ago indicate that the subterranean geologic formation may contain the presence of a huge methane deposit. None other than the engineer who helped lead the team to snuff the Gulf oil fires set by Saddam Hussein to slow the advance of American troops has stated that a huge underground lake of methane gas—compressed by a pressure of 100,000 pounds per square inch (psi)—could be released by BP's drilling effort to obtain the oil deposit.

Current engineering technology cannot contain gas that is pressurized to 100,000 psi. By some geologists' estimates the methane could be a massive 15 to 20 mile toxic and explosive bubble trapped for eons under the Gulf sea floor. In their opinion, the explosive destruction of the Deepwater Horizon wellhead was an accident just waiting to happen. Yet the disaster that followed the loss of the rig pales by comparison to the apocalyptic disaster that may come.

A cascading catastrophe: According to worried geologists, the first signs that the methane may burst its way through the bottom of the ocean would be fissures or cracks appearing on the ocean floor near the damaged well head. Evidence of fissures opening up on the seabed have been captured by the robotic submersibles working to repair and contain the ruptured well. Smaller, independent plumes have also appeared outside the nearby radius of the bore hole itself. According to some geological experts, BP's operations set into motion a series of events that may be irreversible. Step-by-step the drillingteam committed one error after another.

Congressmen Henry Waxman, D-CA, and Bart Stupak, D-MI, in a letter sent to BP CEO Tony Hayward, identified 5 missteps made by BP during the period culminating with the explosion. Waxman, chair of the Congressional energy panel and Stupak, the head of the subcommittee on oversight and investigations, said, "The common feature of these five decisions is that they posed a trade-off between cost and well safety." The two Representatives also stated in the 14-page letter to Hayward that "Time after time, it appears that BP made decisions that increased the risk of a blowout to save the company time or expense." Called by some insiders investigating the ongoing disaster a "perfect storm of catastrophe," the wellhead blew on the sea floor catapulting a stream of mud, oil and gas upwards at the speed of sound.

In describing the events—that transpired in a matter of seconds—they note that immediately following the rupture the borehole pipe's casing blew away exposing a straight line 8 miles deep for the pressurized gas to escape. The result was cavitation, an irregular pressure variance sometimes experience by deep diving vessels such as nuclear submarines. This cavitation created a supersonic bubble of explosive methane gas that resulted in a supersonic explosion killing 11 men and completely annihilating the drilling platform.

Death from the depths: With the emerging evidence of fissures, the quiet fear now is the methane bubble rupturing the seabed and exploding into the Gulf waters. If the bubble escapes, every ship, drilling rig and structure within the region of the bubble will instantaneously sink. All the workers, engineers, Coast Guard personnel and marine biologists measuring the oil plumes' advance will instantly perish. As horrible as that is, what would follow is an event so potentially horrific that it equals in its fury the Indonesian tsunami that killed more than 600,000, or the destruction of Pompeii by Mt. Vesuvius.

The ultimate Gulf disaster, however, would make even those historical horrors pale by comparison. If the huge methane bubble breaches the seabed, it will erupt with an explosive fury similar to that experienced during the eruption of Mt. Saint Helens in the Pacific Northwest. A gas gusher will surge upwards through miles of ancient sedimentary rock—layer after layer—past the oil reservoir. It will explode upwards propelled by 50 tons psi, burst through the cracks and fissures of the compromised sea floor, and rupture miles of ocean bottom with one titanic explosion. The burgeoning methane gas cloud will surface, killing everything it touches, and set off a supersonic tsunami with the wave traveling somewhere between 400 to 600 miles per hour.

While the entire Gulf coastline is vulnerable, the state most exposed to the fury of a supersonic wave towering 100 feet or more is Florida. The Sunshine State only averages about 6 inches above sea level. A supersonic tsunami would literally sweep away everything from Miami to the panhandle in a matter of minutes. Loss of human life would be virtually instantaneous and measured in the millions. Of course the states of Texas, Louisiana, Mississippi, Alabama and southern region of Georgia—a state with no Gulf coastline—would also experience tens of thousands, if not hundreds of thousands of casualties. Loss of property is virtually incalculable and the days of the US position as the world's superpower would be literally gone in a flash...of detonating methane."
- http://www.helium.com/items/1864136
Posted by CoyotePrime at 9:40 AM

I wish the article had spent some more time talking about the warning signs. I mean, one would think there are some of an imminent catastrophe.