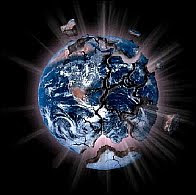 "The earth is not dying, it is being killed.
And those who are killing it have names and addresses."
- Utah Phillips
"Call me a cynic, but as soon as I hear of the latest "rogue state", declared by the US and endorsed, invariably, by UK and Israel- a "rogue", always far away, invariably either poverty stricken, or embargoed- I reach for a 1993 "Encyclopaedia of Word Geography", turn to the page on the latest declared "enemy", and look at the box which lists: "Major resources."
In October 2001, as the assault on and invasion of Afghanistan began, ostensibly in the search for one man, Osama bin Laden, I found (p. 400) : "Major resources: natural gas, coal, iron ore, beryllium, gold, silver, lapis lazuli, sulfur, chrome, copper ..." Although deposits have also been seen, clearly, from satellite for years, incredibly, the might of United States' experts have only made this (estimated at least a trillion dollar discovery) little over a year before they are pondering "draw down" (sort of, maybe, whatever ..)

As Peter Eyre has written: " I was informed of this incredible wealth over 20 years ago, whilst working in the oil, gas and mining industry. The Russians have a wealth of information in their archives in Moscow and the US have been monitoring this wealth over many years, with an in depth study taking place soon after they invaded Afghanistan. Take the area around Kabul. An extensive copper belt extends from southeast Kabul up the eastern side, reaching up and around the US Bagram air base. One can normally associate the existence of copper with that of gold." Further: "... added to this the US proposed gas pipeline - Turkmenistan - Afghanistan - Pakistan - India (TAPI) which is worth inestimable dollars to the US economy" the central aim of US, UK and NATO forces seems obvious. "I would again ask: why are all the coalition forces directing their fighting in the provinces of Herat, Helmand and Kandahar? It is the expected transit route for the TAPI pipeline," comments Eyre. Coincidentally it is also the centre of the Opium trade.

Two days after the Twin Towers fell, George W. Bush stated: "The most important thing is for us to find Osama bin Laden. It is our number one priority and we will not rest until we find him." (Washington, D.C., Sept. 13, 2001.) Yet, incredibly: "Two dozen members of Osama bin Laden's family were urgently evacuated from the United States in the first days following the terrorist attacks on New York and Washington", CBS reported. The Bush and bin Laden family had, of course, been partners in the giant Carlyle Group (arms, construction) for years. "Even though American airspace had been shut down the Bush Administration allowed a jet to fly around the US., picking up family members from 10 cities, including Los Angeles, Washington DC, Boston and Houston." "The skies over America in the days following 9/11 were in lock-down mode, yet the entire family of America's number one enemy is released. Not a single American citizen could fly, yet the family of the evil mastermind who allegedly used commercial jets to destroy buildings departs on commercial jets! This sort of irrational behavior makes it look as if the Bush Administration knew that Osama bin Laden was not responsible for the attacks. " (Link)

Just five months later, George W. Bush was asked: "But don't you believe that the threat that bin Laden posed won't truly be eliminated until he is found either dead or alive?" The President: " I - I'll repeat what I said. I truly am not that concerned about him." (transcript from Press Conference.)

The page before Afghanistan is devoted to another recurring US bogeyman, often accused of "harboring terrorists", Yemen. The little over eleven million population posing a threat to America's three hundred and fifty million, have a life expectancy of fifty (men) and fifty two (women.) Clearly the country could make better use of the "petroleum and natural gas", listed in "Major resources."

Just across the Gulf of Aden, is another American nemesis: Somalia (population approximately ten million, life expectancy two years more than Yemen) where the might of the US Sixth Fleet and UK Navy patrol against pirates, whose unconventional career choice provides facilities and infrastructure the government is unwilling or unable to. Will the occasional extra-judicial murder by US drones turn in to the full scale invasion of another far away place? "Major resources" include: "uranium, iron ore, tin, gypsum, bauxite, copper and other minerals not yet exploited."

Up the coast, where Israeli pirates hijack aid ships and murder passengers delivering essential goods to besieged, poverty stricken Gaza, with impunity - and a to deafening silence from Washington - the wealth of Gaza's natural gas fields are denied to its people, by America's ally, "the only democracy in the Middle East."

Pakistan, US spokespeople claim, increasingly shrilly, is not pulling its weight in the "war on terror", with seriously bad people from Afghanistan, or their allies, operating from within its borders. American troops wearing Pakistani traditional clothing, have, on several occasions seemingly carried out murders within the country's sovereign territory, or been, coincidentally, very close to scenes of explosion and carnage. "Major resources" include: "natural gas, coal, iron ore, bauxite, wheat and tobacco."

As American and Israeli war ships are reported to be heading towards Iran (embargoed by the US since 1979) notable is that it does not alone have a vast oil potential, but: "natural gas, coal, chromium, copper."

Next door, Iraq's vast oil wealth, with its fake "tenders" was carved up long before the invasion to "liberate" the country from a "tyrant" - and impose more compliant despots. The country also has a wealth of: "natural gas, phosphates, sulfur" - and vast deposits of uranium, known to America's ally, Britain, who prospected for it there in the 1950's.

North Korea, no stranger to sabre rattling by the US, was in May, accused of torpedoing the warship Cheonan, vessel of its southern neighbour and close American ally. North Korea has been under a US embargo since 1950, tightened by American's Nobel Peace Laureate President, at the UN in June 2009. No doubt sixty years of deprivation of normal international trade relations have something to do with the country's inability to sufficiently exploit its reserves of: "iron ore, copper, lead, zinc, coal, gold, silver, uranium, manganese and petroleum."

"We would never have been invaded if we exported carrots", is a wry, frequently heard, Iraqi refrain. Indeed. Next time a country is touted as a threat to the universe, reach for an atlas and check the "Resources" box."
- http://www.sott.net/articles/show/210788-Plundering-the-Planet
Posted by CoyotePrime at 6:55 PM

Excellent, that about sums it up folks.

Very true. "We" won't invade any place that "we" cannot profit from. Those profits come from stealing the resources of the countries "we" invade of course.
Greed.
America, what a country.