"The Rise of the Stupids And the Fall of Rome"

"The Rise of the Stupids And the Fall of Rome"
by Les Visible
"I saw where someone referred to Kanye West as a genius. This sort of half excused him for his public embarrassment of saying that certain musical judges had picked the wrong bimbo to be awarded one of those Cracker Jack prizes in the tits and ass ensemble of modern culture. We know all about ‘cultures’ here at the Petri Dish. We’ve got thousands of glass slides with things growing on them and as much dry ice as you’ll find at any of the major concerts. I tried to listen to some Kanye West so that I could catch some of his genius but I was compelled to turn it off before the genius part appeared. I did search engine his lyrics and here’s an example of what I got at random. I scanned a few more but I’ll spare you that. You can find more on your own time. 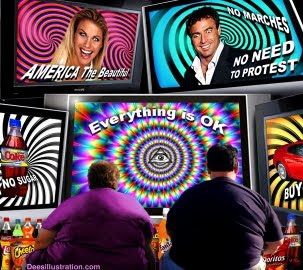 I can’t go to the S&MSM without coming across the name, ‘Gosselin’. It’s there every day. Every day, there are details about this train wreck that includes a brace of sextuplets. They were, or are or maybe they will be again, the biggest reality show going. Someone is making this an ‘in your face’ situation. Someone is behind the scenes pumping this excrescence into the collective mind’s water supply. Someone made Kayne West famous and I suspect it was not his genius. Someone is searching the landscape high and low for new possibilities, day after day for another bad light to present you, the human race, in. I haven’t seen any network TV in many years. I watched the 2000 election on CNN… then there was another long dry spell on the other side. I don’t think I have to watch any of this to get the sense of what it is. Evidence of the impact of culture on the conditions of life is evident everywhere. There is cause, motivation and intent.
A decade or so ago, Disney hooked up with Tavistock and MKUltra on a little genetic experiment. They’d seen what happened with The Spice Girls and they wanted to expand on that concept, so the lab techs cooked up some polystyrene Mouseketeers and groomed them for the celebrity chute. Out came a Spears and a Timberlake and an Aguilera too. N’Sync and other permutations followed. There was an interesting contrast between white bread polysaccharides and gangsta-rapping, Hilfiger jacket wearing, expletive artistes.

In a time of war and plunder, stupidity is a rampaging nation’s greatest asset. If you don’t plan ahead you have to fly by the seat of your pants. This isn’t all that hard either given the location of the brain at the time. It seems to me they stuck their toe in the water with that MTV show, Real World. It’s as real as you want it to be baby. It is interesting… or it will be interesting to future archaeologists to explore the myriad similarities of the time. No doubt they will come across scientific papers that detailed the isolation of the Agent Stupid gene. Maybe it will turn out that it was a laboratory product that was added afterwards. It doesn’t matter if it was always a part of the human organism or if they created it. What happened… happened.

In entirely different laboratories they were working on soft drink cultures and they found that aspartame and other chemicals most definitely made you fat. Fat and stupid are a formidable combination. On the social end there appeared the psych workers whose job was to legitimize every excess as another painful road to general acceptance. As the all embracing arms of the modern world were extended to clasp every emerging perversion to her perfumed breast, the fisters and pain freaks; the pedophiles and animal amorists, the pierced and the bound brought forth the new vision of the returning Jesus, morphing into Ashtaroth rising from The Pit.

In the middle of this unbridled excess there came the Speech Police who monitored every word and phrase for bias against the engines of decadence as rapture. On the one hand, freedom was license. On the other hand, objection was crime, as was accurate definition. Definition of anything was an illegal restriction, unless the definition coincided with the intent of those creating the conditions. Madonna became a mystical cabbalist and if one looked closely they could see the flaming Hebrew letters dancing up her inner thighs to what is purported to be The Promised Land. Here the Roman armies had trekked a time or two before. It was the Lincoln Tunnel at rush hour, transmogrified into the gates of St. Peter.

In the times before the times that awakening crashed down upon the malls and media, hypocrisy became the most celebrated performance of the day. Powerful leaders could wax eloquently about peace, while murdering shepherds and farmers for the fuel that lay beneath their fields and gardens. As the job opportunities were erased, the military opened their gates to the ranks and rows of canon fodder, which moved in slipstreams from the unemployment benefits lines to the enlistment lines. The survival and self interest centers of the human herd were amplified and intensified by invisible beams from cell phone towers. The effluvium from pharmaceutical factories was discharged into the water supplies; they had to stone the village in order to save it. Men grew breasts and women turned into hydras. We entered through the rear end into the Land of Myth and Legend. They electrified the fantasies of children with tales of super heroes, bound in service to the very forces that created the mayhem in the first place. The state became the First Temple of Unholy Prostitutes that worked for the Mac-Daddy Pimp corporations.

It did not matter as one new absurdity followed the other. Nothing real remained to compare it against. The unreal had become real. The prophet had been sent packing and humanity itself was just another commodity on the endless rows of shelves that curved away into unimaginable distances. Somewhere, impossibly far ahead, was the checkout counter. Somewhere, far, far back in an unremembered past, it had all begun. Was it the result of conditions imposed or was it written into the genetic code? Somehow the abusers always had a great deal more cachet than the saviors. Was it before or after Esau?

There appears to be no limit to how insane it might become. Whatever it is it will seem normal and woe betide the unaware who question its presence. The impressive and indomitable force of stupid, reigns supreme over the land. Stupid is genius. Stupid is God. Stupid is as stupid does and stupid does what it pleases. Stupid will kill itself before you day after day and then rise from the dead to lead the legions of stupid to the place where stupid rests.

They have not yet opened the gates of the chittering worlds that wait behind them, in the coliseums where you have been marched, at the behest of Stupid. There is still a semblance of order and the highways of hope are constructed by the hour and woven out of the words of the liars who have led you to this place. The true beauty of Stupid is that it will never occur to Stupid what it cost and what was lost. Perhaps Stupid is indestructible and is the heir to a kingdom that only he can see. Some certain and profound confidence motivates Stupid and only Stupid knows what that is. Sometimes you just run out of things to say and… this is one of those times."
- http://zippittydodah.blogspot.com/2009/10/rise-of-stupids-and-fall-of-rome.html
Posted by CoyotePrime at 12:28 PM

Stupid could be the death of us all. Stupid is not ignorance. Ignorance can be over come by learning. Stupid has no cure.
Stupid seems to be in control of most everything now days.