"The Well From Hell" 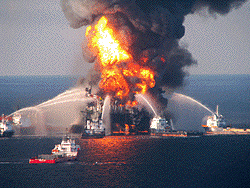 "The Well From Hell"
by Peak Oil Blog
"There are some that think that BP has drilled into an deep-core oil volcano that cannot be stopped, regardless of the horizontal drills the company claims will stop the oil plume in August. Geologist, Chris Landau, for instance, has called for a showing of the mudlogs. A mudlog is a schematic cross sectional drawing of the lithology (rock type) of the well that has been bored. So far, no one has seen them… BP keeps them hidden.

It is a dangerous game drilling into high pressure oil and gas zones because you risk having a blowout if your mud weight is not heavy enough. If you weight up your mud with barium sulfate to a very high level, you risk BLOWING OUT THE FORMATION. What does that mean? It means you crack the rock deep underground; as the mudweight is now denser than the rock, it escapes into the rock in the pore spaces and the fractures. The well empties of mud. If you have not hit high pressure oil or gas at this stage, you are lucky.

The problem is that BP may not only have hit the mother of high-pressure wells, but there is also a vast amount of methane down there that could come exploding out like an underwater volcano.

I recently heard a recording of Richard Hoagland who was interviewed on Coast to Coast AM. Mr. Hoagland has suggested that there are cracks in the ocean floor, and that pressure at the base of the wellhead is approximately 100,000 psi. Furthermore, geologists believe there are another 4-5 cracks or fissions in the well. Upon using a GPS and Depth finder system, experts have discovered a large gas bubble, 15-20 miles across and tens of feet high, under the ocean floor. These bubbles are common. Many believe they have caused the sinking of ships and planes in the Bermuda Triangle. That said, a bubble this large — if able to escape from under the ocean floor through a crack — would cause a gas explosion that Mr. Hoagland likens to Mt. St. Helens… only under water.

The BP well is 50 miles from Louisiana. Its release would send a toxic cloud over populated areas. The explosion would also sink any ships and oil structures in the vicinity and create a tsunami which would head toward Florida at 600 mph. Now, many people have called Hoagland a fringe thinker and a conspiracy theorist. And they may be right… But that doesn’t mean he isn’t on to something.

The escape of other poison gases associated with an underground methane bubble (such as hydrogen sulfide, benzene, and methylene chloride) have been found. Last Thursday, the EPA measured hydrogen sulfide at 1,000 parts per billion — well above the normal 5 to 10 ppb. Some benzene levels were measured near the Gulf of Mexico in the range of 3,000 – 4,000 ppb — up from the normal 0-4 ppb.

The Oil Drum , an industry sheet, recently ran an article about the sequence of events that tried to stop the oil spill. The upshot of industry insiders was that after trying a number of ways to close off the leak, the well was compromised, creating other leaks due to the high pressure. BP then cut the well open and tried to capture the oil. In other words: BP shifted from stopping the gusher to opening it up and catching what oil it could. The only reason sane oil men would do this is if they wanted to relieve pressure at the leak hidden down below the seabed… And that sort of leak — known as a “down hole” leak — is one of the most dangerous kind.

It means that BP can’t stop if from above; it can only relieve the pressure. So, more oil is leaking out while BP hopes it can drill new wells before the current one completely erodes. BP is in a race against time… It just won’t admit this fact.

According to the Oil Drum: "There are abrasives still present, a swirling flow will create hot spots of wear and this erosion is relentless and will always be present until eventually it wears away enough material to break it’s way out. It will slowly eat the bop away especially at the now pinched off riser head and it will flow more and more. Perhaps BP can outrun or keep up with that out flow with various suckage methods for a period of time, but eventually the well will win that race, just how long that race will be?" No one really knows… Which leads us back to Mr. Landau’s point about the mudlogs and why BP won’t release them. I don’t know… Maybe I’m wearing my tinfoil hat too tight this morning… But this stuff seems possible — if it’s only a worst case scenario.

What strikes me as odd is the way the leadership of BP and the Obama administration is acting. BP is running around apologizing to everyone they can find. Obama says give us $20 billion in escrow and $100 million for the people Obama put out of work on the oil rigs due to his six month ban — and BP says, “Sure thing mate, no problem.” And all of this in a 20-minute meeting? I’ve been dealing with oil companies for a long time and it just doesn’t add up…

Contrast it, for instance, with the Exxon situation in Alaska or the Union Carbide disaster in India. Exxon fought tooth and nail for its shareholders; it appealed court rulings for 19 years. Union Carbide wasn’t settled for 25 years. BP is rolling over like a simpering dog. Why? The only reason I can think of is that the company knows — better if not as well as the Obama administration does — that it will get worse."
- http://peakoil.com/enviroment/the-well-from-hell/
Posted by CoyotePrime at 11:10 PM

This should be a feature front page article in every paper in the country.