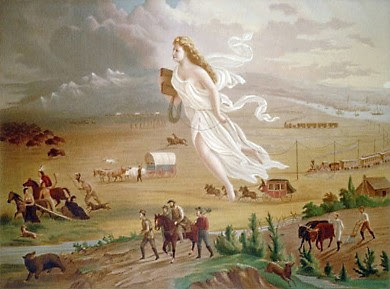 Painting by John Gast (circa 1872) called American Progress is an
allegorical representation of Manifest Destiny. In the scene, an
angelic woman (Columbia, a 19th century personification of the
U.S.) carries the light of "Civilization" westward. American settlers,
stringing telegraph wire, follow her. American Indians and wild
animals flee into the darkness of the 'uncivilized' West.

Striking painting. It encapsulates many decades of self-delusion by the US neocolonialists. The 19th century is indeed the historic cradle and temporal breeding ground for whole civilisations being trodden underfoot. America followed Britain's shameful example. Look how that ended up.

I have always wondered how it would all be different if the Pilgrims had landed in Vera Cruz instead of on Plymouth Rock. :-)